The Downside of Hyper-Positivity at Work

Our workplace communication is filled with a glut of happy face emojis, exclamation points, and declarations of false familiarity. What’s the cost? 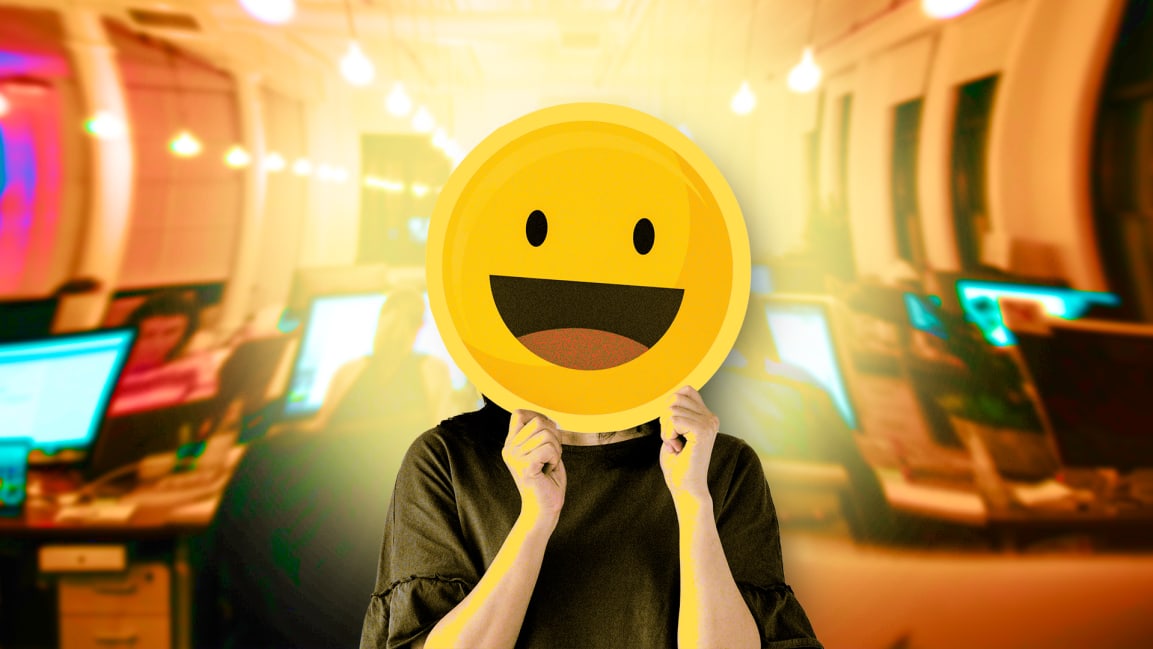 The other day, I read a tweet in which someone asked if positive people are more successful than others, or if being positive leads to more success. It’s an interesting question, not because it has an answer, but because it contains a common assumption: that success and positivity are necessarily correlated. Amidst all the happy face emojis and exclamation points punctuating mundane sentences with false familiarity, how often do people ask if all that positivity is, well, positive?

I define hyper-positivity as the overuse of emojis, exclamation points, and adjectives like “excited,” adverbs like “tremendously,” or business-world cliches like “reach out” in a way that creates a disingenuous tone in writing. It also refers to individuals who use emotive patterns of speech and presentation of ideas to the point they become tiring to interact with.

Generally, hyper-positivity in relation to the workplace can devalue reasoned positive values and actions. Everything becomes upbeat—happy, happy, happy—and this can generate suspicion or distrust among those who don’t really see the world that way or who bring a strongly analytical perspective to what they do. Part of the reason that some people respond to this hyper-positivity negatively is that they feel familiarity and trust need to be earned—they are not products of positive words or attitudes, but of time working together and recognition of shared common values and ideas.

In the U.S., at least, this issue is intensified because Americans have a way of conflating positivity with being polite or professional. But there is a difference and the two do not necessarily need to intersect. I bring a skeptical mindset to almost everything I do, and I see polite skepticism as a fundamental component of professionalism. I trust working environments and peers with whom I can have open disagreement accompanied by careful thinking. An overemphasis on positivity leads me to question the extent to which I am hearing the true thoughts of others, which, in turn, leads me to be less trustful of their comments and analyses.

Hyper-positivity can also create intercultural problems when working with individuals from other societies, such as Japan, in which this sort of self-representation isn’t the norm but is seen as rather odd. For Japanese, being polite is far more important than vocalizing feelings of friendliness, and being polite means respecting the status of others and maintaining a level of decorum as a relationship is developed and trust earned over time. Happy smiles and exclamatory comments don’t necessarily engender trust.

Some of the pitfalls of hyper-positivity could be addressed if we brought back a sense of professional decorum—an emphasis on modest and measured reactions to others—and a recognition that we need not be on a “bestie” basis with everyone we meet. I often receive email from outside companies soliciting my business for things like educational software or documentary videos. They usually begin with something like, “Hey John!” despite the fact that I’ve never encountered the sender. I would call those emails examples of toxic positivity, because they generate the opposite response from what is desired by the sender. Those solicitations head straight to spam most of the time. I don’t even read them. Why? Because the sender failed to recognize that friends, colleagues, and complete strangers are different and, thus, require different styles of interaction in order to build trust.

Much has been written about the pressures young professional women, in particular, feel to present themselves both in email and in person as warm or friendly, which is basically another way of saying non-aggressive. This leads to overuse of things like exclamation points and apologetic statements to ensure male readers interpret the tone of emails from women as benign and upbeat. Of course, the problem of hyper-positivity isn’t just one of too many exclamation points or emojis. Hyper-positivity is often a product of unfair expectations placed on people in the workplace—and particularly on women—in which professionalism is equated with being friendly and people face professional repercussions if they fail to adhere to expected, usually gendered, social rules.

Hyper-positivity has a way of undermining a sense that others are objectively and carefully reacting to complex situations and to those with whom they interact. It also can be interpreted as being disingenuous and, as a result, can erode trust among co-workers or prevent the development of good working relationships with others attempting to gain one’s attention or business. But it is the gendered nature of hyper-positivity that is most pernicious, because the expectation that women will “soften” their tone by being overly friendly reinforces and reproduces the structures of male dominance that continue to characterize the workplace and society more broadly. And this is why bringing back a sense of decorum is so important: Hyper-positivity is a product of systemic or structural sexism. To address that problem, we need to recognize the consequences women face if they do not perform professionally.

Cutting down on the emojis, doing less “reaching out,” and not being excited about mundane things would contribute to creating more equitable environments for work grounded in feelings of mutual trust rather than feigned familiarity.