Love, Freedom, and Leadership: A Source of Pride

Paul Woodruff has been UT Austin’s Darrell K. Royal Professor in Ethics and American Society. He teaches in the HDO MA program and has received our student-chosen teaching award twice. His research has focused on the ideas behind the invention of democracy in ancient Greece. His new edition of Thucydides’ History of the Peloponnesian War is due to be released in November. In this post he follows Thucydides in bringing out alternative accounts of the end of tyranny in an ancient Greek city state.

In ancient times the people of Athens were proud of their freedom, which gave them the confidence to whip a much larger army of the Persians at Marathon. They were especially proud of the way they believed they had won their freedom—through the assassination of a tyrant by a pair of lovers. They expressed that pride by erecting monumental statues of the pair, Aristogeiton and Harmodius. Harmodius was an attractive youth, full-grown but beardless; Aristogeiton was older, with a full beard. Such partnerships were common in Athens at the time.  The older lover would serve as a mentor to the younger beloved, and the two would both be the better for their loving relationship, as neither one would wish to do anything dishonorable in the eyes of the other.

At the time, Athens was ruled by a pair of tyrant brothers, the sons of the tyrant Pisistratus—Hippias and Hipparchus. Like men of all times who have great power, Hipparchus was a sexual predator who thought he could get away with anything.  He hit on Harmodius (who must have been very good-looking) more than once, but the young man refused him.  The tyrant was miffed and took his revenge by dishonoring the young sister of Harmodius. The young man went to his lover for help and the two resolved to kill the tyrant brothers, hoping that no one would ever have such power in Athens again. They managed to assassinate Hipparchus (the younger brother), but the tyrant’s bodyguards killed Harmodius and captured his lover, whom they tortured. The surviving tyrant brother became more brutal than ever and had to be put down several years later with the help of another city-state, Sparta.

Thucydides insists that the lovers’ attempt at assassination only made things worse: violence, he shows, leads to more violence. In his History, he tells again and again how war, especially civil war, brings out the worst in people. But the majority of Athenians focused on the love story and believed that the lovers had made the way clear for democracy.

Once Athens was free from tyrants, the city had to invent a new way of governing itself—democracy—and this required that they develop a new concept of leadership.  This was exemplified by Pericles.  His influence was immense; it was based on the integrity of Pericles’s character and the eloquence of his speaking. But the freedom that made this possible grew from a foundation of love. Tyrants were henceforth warned to suppress such relationships, while the democracy of Athens celebrated the triumph of love by venerating the statues of these two lovers. After the Persian king Xerxes plundered the statues, Athens had new ones made.  The original bronze statues are long gone; bronze is too valuable a material to survive the vicissitudes of war.  But luckily the Romans made copies in marble, and these we have. 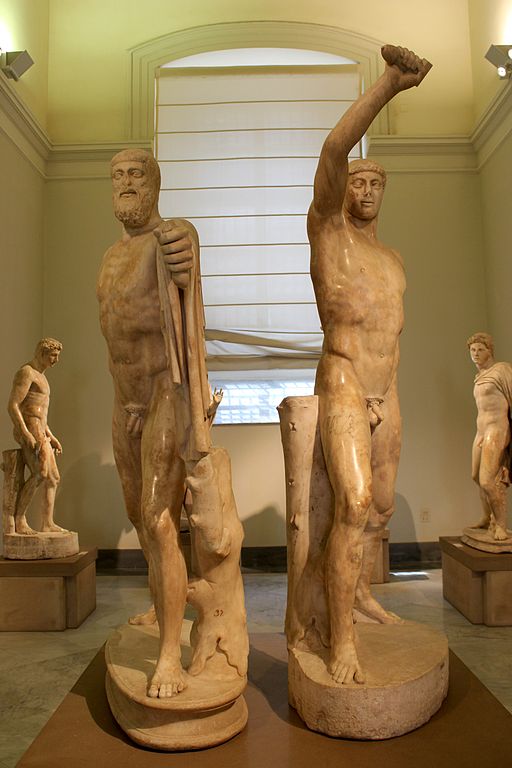